On Monday April 26, 2021 at 1628 hours, Battalion 2 was dispatched to the area of Delsea Drive and Frontage Road for a Motor Vehicle Crash.  Crews arrived to find a MVC involving a 275 gallon tote containing waste motor oil.  The container had fallen off a trailer that was being towed by a truck and was struck by an on coming vehicle.  The collision resulted in the tote being compromised spilling the 275 gallons of waste oil all over the roadway.  There was one minor injury which was handled by EMS.  The resulting Hazmat spill closed Delsea Drive from Olive Street in Westville to Shetland Way in Deptford and two Ramps for Interstate Route 295 for an extended period of time.  Before the roadway could be shut down, numerous motor vehicles had driven through the waste oil causing the oil to be spread over one mile of roadway.  The incident area was secured and numerous agencies were summoned, including NJDOT, NJIMAT, Gloucester County Hazmat, Deptford OEM and DEP.  On the arrival of the NJ DOT Traffic Diversion team, the FD was released. 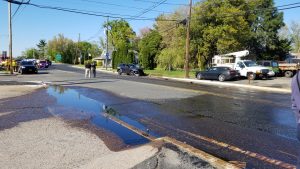 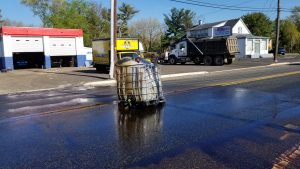 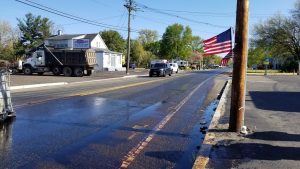